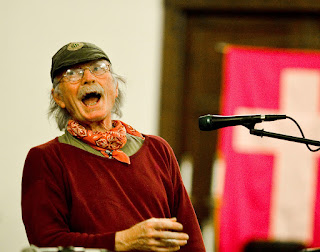 I've been working on this for a while - a comprehensive set of unreleased tracks from this American treasure, culled from 40+ bootleg recordings and spanning the years 1976-2016. Here you go!

NOTES: The first disc has my favorite tracks out of all the shows/years, then the other four have the rest of the tracks I've tracked down and are in chronological order. Songwriting credits are in the folders. No sound adjustments other than level boosting. Yes I have committed the heresy of making MP3 files, I could do FLAC but it would take a while, let me know if that's a priority.

Posted by ShardsOfBeauty at 4:30 PM

incredible, thanks so much! some shows on here I haven't heard before. any chance of uploading the complete shows/or fancy a trade?

Thank you so much for this. The height of American beauty and genius on this problematic 4th. Much appreciated!


This looks like a real labor of love. I've been a Hurley-fan for 36 years now, found him through Christgau' first Record Guide. Thanks a lot for now. More as soon as I have listened in.
Best wishes, Strohmian

regarding show availability, almost all of these came from dimeadozen, but feel free to contact me at sleeve (at) kittymail (dot) com for trades/uploads.

Thank you! Anything Hurley-related is welcome over here!

Came to your blog via doom & gloom... It's like Christmas, so much fantastic Hurley. Thank you so much for your work !!!!