Oh hi! I was shocked out of my laziness and motivated to do another "great 90's band" post, this time with a lovely batch of obscurities from the much-missed Thinking Fellers Union Local 282. 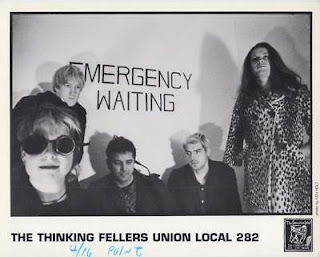 and here's the liner notes:

1. This song has been vehemently disowned by the band, and they refused to include it on the 2LP/CD reissue of Wormed By Leonard, but it was on the original cassette release. If you want to make a CD of these tracks, just delete this one and you’ll have enough room!
2-3. Their first 7” release, different & earlier version of “2x4’s”
4. split single w/Sun City Girls that has never been reissued in any form
5-8. alternate versions and one outtake from Mother Of All Saints - from the “Where’s Officer Tuba?” EP
9-13. solo tracks from each band member, from a Bananafish compilation CD
14. from the compilation series “Lyrics By Ernest Noyes Brookings”
15. from a rare cassette compilation on an obscure Olympia WA label that I think was Unwound-associated, I’m sure this is a cover but don’t know who wrote it.
16. Residents cover from the “Eyesore” compilation CD
17. compilation track from the “Sidereal Rest” CD on Scratch Records
18-19. 7” released on Amarillo, 19 is an Ennio Morricone piece
20-21. 7” released on Japan Overseas
22. from the CD, this volume of the Teriyaki Asthma 7” series was never released as vinyl
23. from a CD compilation included with Badaboom Gramaphone #4 magazine
24. from a CD compilation included with Sound Collector #6 magazine
25. from the “Hangin’ From The Devil’s Tree” compilation CD
26. Shaggs cover!! from the “Better Than The Beatles” compilation CD