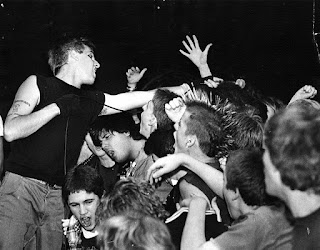 OK OK here's a streaming link for the kidz:
https://soundcloud.com/sleeve-the-dj/va-no-filler-mp3-mix

Maybe a year ago (in 2018), I was doing my monthly DJ set in a local restaurant, and it was right after they opened. Nobody had come in yet, so I decided to throw together a short impromptu set of old school US hardcore/thrash tunes. It rekindled my love affair with the stuff, and I started toying with the idea of a personal best-of mix CD. I ended up researching down into the primary source level to find release or recording dates, buying at least a dozen records to fill some gaps in my collection (and by extension, the mix itself), and going through 6+ early versions of the final tracklist.

As obsessive as any mix I’ve ever made, this is a love letter to early US hardcore. It was kind of amazing to make this, having lived through the last third of it as an active participant (I first heard true hardcore/thrash punk music in late 1982). It's so clear in hindsight that the bell curve peaks sometime in early 1982, I mean you can’t deny the 1-2 punch of “Gas Chamber” and then “Mommy Can I Go Out And Kill Tonight”, which are smack in the middle of this CD.

Even though that ’82 peak date might have been true in the urban centers of the movement, the detonations continued (especially in the Midwest, where I was from 1984 on) well through 1985. At that point it started to morph into the more metallic droptune/blastbeat stuff, or indie, or C86 jangle, or “pigfucker” music, etc. To me personally, this particular scene kind of ended with the death of D. Boon, hence the last track (which also looks back on the era, being a Urinals cover).

The tracklist here obviously reflects my Midwest punk roots, and I genuinely believe that’s the best the years had to offer (although the primo California/DC/Texas tracks are also undeniable). Y’all also get to benefit from my obsessive collecting, I wouldn’t be able to make this mix on Spotify.

Everything is/was officially released (although possibly out of print now) except for the Fear track, which is from a live bootleg recorded in Eugene Oregon in 1982, and the Necros tracks which remain out of print rarities.

It's sequenced in the best chronological order I could research, so you can hear the sound evolve (lol). Sometimes I used date of recording, sometimes official release date, whichever fit best in the sequence (for example, Vicious Circle was recorded in 1981).

Tracks have been ruthlessly edited to minimize any gaps in the onslaught.

Yes I know this is like 99% straight white dudes but I grew up with this music and it is burned into my heart.
(cue Sebadoh's "Gimme Indie Rock")

The rules are:
All songs must be under 2 minutes. This weeded out a lot of poseur bullshit right from the start. Sorry, Social Distortion! I still love you, I promise.

1 track per release per band per year. This means compilation albums are allowed more tracks in a given year than LPs. LPs only get one track no matter how great they are - apologies to Damaged, Vicious Circle, the Die Kreuzen debut, and the Angry Samoans ( I kinda cheated with the Samoans cuz ‘Lights Out” was on the Take It magazine flexidisc as well as the LP).

The only bands to get two tracks in a given year are Minor Threat and Black Flag, each for separate 1981 releases. Compilations that get more than one track are Not So Quiet On The Western Front, Flex Your Head, The Master Tape, the Take It flexidisc, and This Is Boston Not L.A..

No "joke" punk (i.e. Meatmen, AOD, whatever, no thanks, also no “Killed By Death” style punk or anything influenced by old-school punk - sorry, Toxic Reasons).

No proto-indie (i.e. Meat Puppets or Replacements, but Minutemen and Husker Du get a pass because I say so).

NO METAL (fuck that shit, D.R.I’s Crossover was where I drew a permanent line. Siege barely made it in here).

The track needs to fuckin rock and at least approach thrash tempo (apologies to The Wreck’s “Punk Is An Attitude” which is still awesome).

Posted by ShardsOfBeauty at 7:14 PM